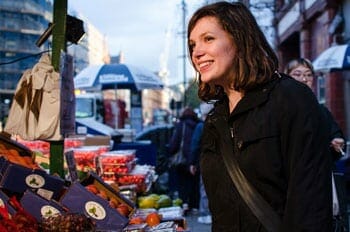 According to the WHO, mental disorders are one of the top public health challenges in the European region. While nutrition has been shown to be a key factor in physical health the MoodFOOD project addresses the role of nutrition in mental health. The first Work Package of the MoodFOOD project aims to investigate the bidirectional association of diet and obesity with depression using observational evidence. The goal here is to identify any food patterns, groups and/or nutrients that could have the potential to reduce or increase the risk of depression. The project also recognises that depression, or depressed mood, may change or influence food consumption and takes this into account in research.

From London, Anika is working with observational data from the Whitehall II study, which is a cohort of over 10.000 British Civil Servants who have been completing questionnaires and taking part in health screenings over the last 30 years (find out more on: http://www.ucl.ac.uk/whitehallII/about-us). This rich dataset permits Anika and her colleagues to view the sequence of health events and health behaviours.

The UCL team, led by Anika Knüppel, have a paper under review reporting on the associations between sugar intake from sweet food and drinks with common mental disorders and depression. The analysis is based on 22 years of follow up and 7 waves of data from the Whitehall II study.

The analyses suggest an adverse effect of the consumption of sweet foods and beverages on long-term psychological health, with higher consumption linked with greater odds of depression 5 years later.
Poor mental health was not associated with high sweet food and drink intake 5 years later. That there was no effect of depression on later sweet food and drink intake, means that ‘reverse causation’ is not likely to account for the association. It appears that the link observed is due to the effect of diet on mental health, rather than the other way around.

In conjunction with other research, these findings indicate lower sugar intake might not only be favourable for physical health but also mental health. In the light of public health initiatives on sugar intake, Anika’s results lend added support for interventions that aim to reduce sugar intake on a population level.

Further details of the study will become available when the research is accepted for publication.

Anika Knüppel is a PhD student in Epidemiology and Public Health at University College London (UCL) in the UK. She is working on findings for the first Work Package of the European MoodFOOD project. Anika holds a BSc and MSc in Nutritional Sciences from Martin Luther University Halle-Wittenberg in Germany and has had additional training in nutritional epidemiology.